Political Program: The Charter of Lampedusa

Autonomous School Zurich has decided to accept the Charter of Lampedusa as its political program. The text on this page is a short version. 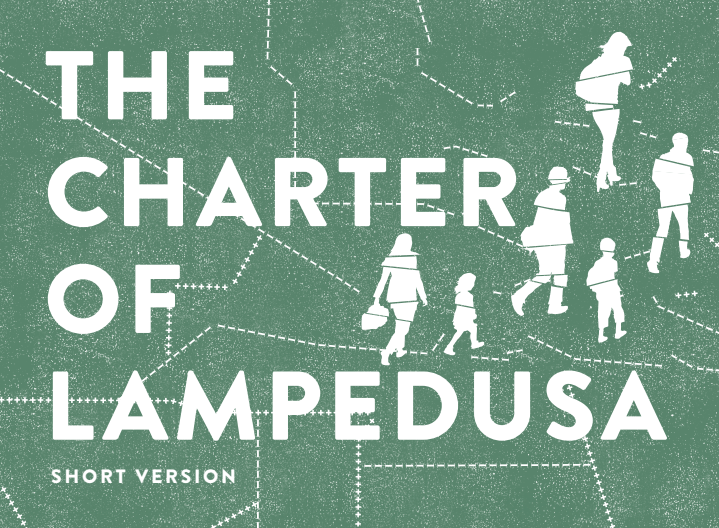 The Charter of Lampedusa was written between 31st January and 2nd February 2014 during a meeting that gathered various organisations, NGOs, groups and individuals.
The Charter is not intended as a draft law, legislative proposal or as a petition to governments. All the groups and individuals who undersign the Charter of Lampedusa commit to putting it into practice and to defending its principles through their endeavours, in the ways, languages and actions that each of them considers relevant, whether or not the Charter obtains recognition by current state and/or supra-state institutions. These are basic rights that must prevail all over the world.
Current migration policies foster global inequality and exploitation – particularly the European Union’s and those of any other country such as Switzerland which are de facto part of the European migration system. This system anchors the distinction between those who can move freely and those to whom such a right is denied.
The Charter of Lampedusa requires a radical economic, political, legal and cultural rethinking. Such a U-turn begins with the construction of an alternative vision: freedom and right to self-determination for all regardless of one's nationality or place of birth/residence.
As human beings we all inhabit the Earth as a shared space. Differences must be considered as assets, a source of new opportunities, and must never be exploited to build barriers.

The principles of the Charter of Lampedusa:

FREEDOM OF MOVEMENT
The Charter of Lampedusa claims Freedom of Movement for all.

FREEDOM TO SELF-DETERMINE ONE’S PLACE OF RESIDENCE
All human beings shall be free to determine where they want to live.

FREEDOM TO PLAN A NEW LIFE, WHEN MOVEMENT IS NECESSARY
Anyone who is forced to leave their country shall have the right to move to any other country without any form of bureaucratic hassle. They should be able to choose freely the place and the social and cultural environment in which they want to live.

PERSONAL FREEDOM
No one shall be imprisoned as a consequence of claiming their right to freedom of movement.

The principles of the Charter of Lampedusa are further detailed in the following paragraphs.

EU countries and Switzerland benefit massively from weapons exports. People who are forced to flee from conflicts where such European armament is used and seek protection in the EU are held at the borders by means of military violence.

In order to achieve the principles stated above, the Charter of Lampedusa claims a fundamental demilitarization of European borders. This encompasses:
• Immediate termination of weapons exports
• Redirection of all financial means currently used to militarize borders to guarantee safe migration routes and high standards in protection and reception of those who migrate out of need
• Abolition of the Ecosur system conceived to impede access to EU countries
• Abolition of the European agency Frontex conceived to combat the arrival of migrants in EU
• Termination of all military operations led by the EU and its member states carried out both at the borders of the EU and outside of the EU territories (e.g. Libya)
• Abolition of all control systems and military agendas intended to control migrations
• Abolition of all material barriers (walls and physical barriers) intended to prevent freedom of movement.

The Charter of Lampedusa stands for global freedom of movement for all.
The history of humanity is a history of migration. Over time migration has become a basic feature of neoliberalism and the capitalist economic system. Moving in the world according to the needs of the global economy is an economic imperative which is forced upon a large number of human beings, whilst personal movement is a privilege accorded to a minority.

We refuse that people be split according to their origin, their nationality or any other legal or social criteria. No distinction shall be made between those who can enjoy freedom of movement and those who, to travel the same path, must suffer discrimination, exploitation, violence, imprisonment and the risk of losing their life. Therefore, the Charter of Lampedusa claims:
• Immediate abolition of visas
• Abolition of “migratory clauses” from any agreement with third-party states
• Equality of employment conditions for all regardless of residence status
• Right to entry regardless of one’s income or wealth
• Abolition of legal entry quotas and any other form of restriction
• No Illegalisation of people: migration is not a crime
• No criminalisation of people helping migrants regardless of the “legality” of their status.

At all moments of the migration process, every person facing institutional repre-sentatives must be permitted to understand what is happening to them, be in-formed of their rights, be able to make themselves heard and understood in their own language and to participate in the decisions which are made about them.

Current migration policies and border controls prevent people from choosing freely the place where they want to stay and therefore impedes them from achieving their life plans. Migrants are either forced to stay in some countries, or pushed back to transit countries or sent back to the country of their first arrival.

Every human being shall be free to choose where to live. Spaces and territories shall not be claimed to be the property of individuals, organisations or national States. Therefore we claim:
• the abolition of all national and international laws, especially EU legislation deriving from the Schengen treaty, which limit the freedom of movement of European citizens and of those who come from so-called ‘third countries’
• the abolition of the Dublin Regulation which forces migrants to apply for international protection in the first EU member state they enter
• All countries should reach high and fair standards in protection and reception of migrants.

Even when migration seems to be an individual choice, it is never completely separate from ecologic, social, economic and political factors. Armed conflicts, natural disasters and injustices ravaging large parts of the planet, are phenomena linked to the current economic model. At the global level resources and wealth are shared in increasingly unfair ways. Consequently it has become impossible for many individuals around the world to lead a dignified life in their place of birth. Yet even when forced to flee, migrants are prevented from choosing freely the place they want to live in, they are instead arrested, interned or sent back.

No one shall be forced to leave the country where they were born or the country where they live, against their will. Therefore the freedom to fight any form of exploitation and discrimination remains essential. Every human being shall be free to choose where to live and realise their life plans. Every human being must benefit from equal access to social and political rights.
The Charter of Lampedusa claims:
• Bureaucratic-impediments-free access to residence status and freedom to stay
• The right to work: the right to access all professions, to work in safe conditions, with full respect of the person, with no discrimination and with equal pay.
• The right to inhabit an adequate housing space regardless of income level or country of origin
• Equal right to healthcare and access to welfare for all
• The right to education: non-discriminatory, free access to knowledge and education for all
• The right to build and preserve a family and affective personal core: bureaucratic-impediments-free immigration of other family members
• The right to participate in social, cultural and political life: right to vote at all levels
• The obligation to fight all forms of verbal and written discrimination which foster prejudices and racism
• A new form of citizenship: recognition of the full exercise of equal rights to anyone who finds themselves in the EU, regardless of their citizenship and to call for the recognition of a single European citizenship based on ius soli (right of the soil).

FREEDOM TO PLAN A NEW LIFE, WHEN MOVEMENT IS NECESSARY

The chronic and structural socio-economic production of conflicts, as well as climatic and environmental disasters often result in an immediate need to leave one’s place of residence. Every human being forced to leave their country of birth/residence due to physical, economic, social, cultural, individual/group potential or past persecutions, has the freedom to choose where to settle and shall have the right to be reunited in their new home with their loved ones.
The Charter of Lampedusa claims:
• To oppose all EU’s and any other international Organisations‘ “humanitarian“ policies which translate into repressive measures against people seeking protection
• The need to guarantee safe migration routes and to guarantee unconditional right of entry for all
• The immediate abolition of all forced repatriation
• The abolition of all containment and detention centres
• To oppose the externalization of borders by means of containment and detention centres outside of the EU
• To refuse the squandering of public resources on the current migration system and their distribution in the hands of subjects who speculate on migrants’ lives - there is no way these places can be reformed
• To redirect the resources that to date have been dedicated to such places, to build instead, a shared system based on the development of decentred, widespread reception activities in various areas around the Mediterranean and beyond.

No one shall be imprisoned as a consequence of claiming their right to freedom of movement.
In the EU and in Switzerland, migrants without residence status are either arrested or pushed back at the borders. Migrants seeking protection are arrested and kept in detention centres which resemble prisons. These centres are places where violence prevails and all the deaths and violence which have occurred within detention and confinement centres, on EU grounds and in countries to which EU borders control is externalized, are to be denounced. Such centres foster the criminalisation and discrimination of migrants while being funded through public finances.
Therefore the Charter of Lampedusa stands for:
• the abolition of all forced repatriation practices
• the immediate abolition of administrative detention and the closure of all detention centres and of all reception centres which limit freedom of movement
• the redirection of resources that to date have been dedicated to such places to social projects for everyone. 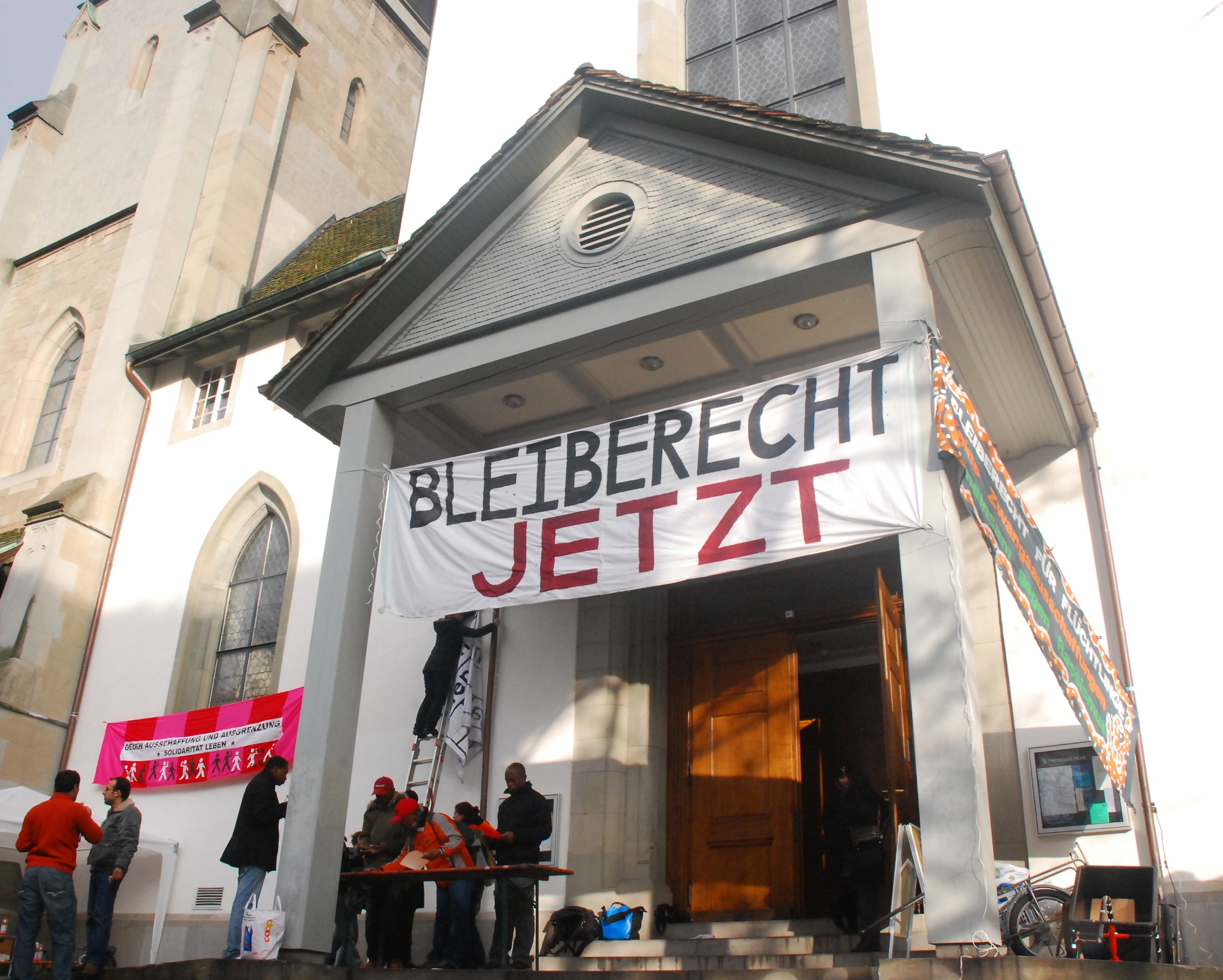 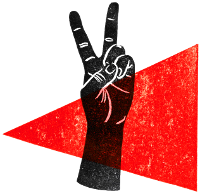